making costumes is one of my very favorite things to sew.  and adding little details is super important to having a 'complete look.'  when making a lalaloopsy costume, or a rapunzel costume, or even a jesse costume, you're goin' to need one of these: 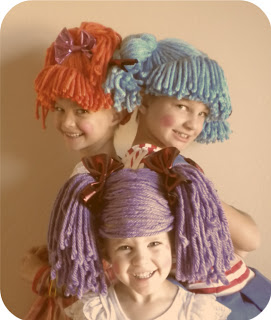 a pair of kids nylons or tights (any size, in matching color or a 'nude' color)
yarn

*** for a lalaloopsy wig, i used 2 skeins of lion brand hometown usa-- there are lots of colors to choose from, you can get them at walmart, and should be able to find them at jo-anns or michaels ***

*** for a rapunzel wig, i used 2 skeins of red heart 'love' yarn-- softer than regular red heart yarn-- the thinner yarn helps keep the rapunzel wig from getting too heavy in the back ***

*** for a jesse wig (from toy story), i used 1 skein of lion brand hometown usa-- the costume includes a hat, so the crown of the wig will be covered and doesn't require the 'thick hair look' of the lalaloopsys*** 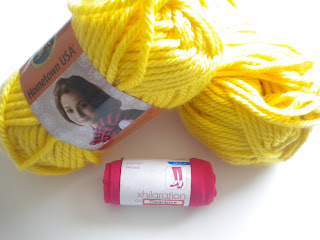 the waistband of the tights is going to become the 'skullcap'-- the hat that the yarn will be sewn to.  it is suprisingly comforable and stays in place pretty well.

using a zigzag stitch, sew along the sewing line. 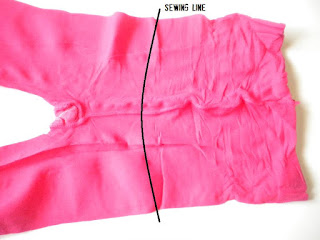 try the cap on your kiddo to make sure it is not too big.  you don't want a lot of extra fabric anywhere.  it should fit snuggly.  once it is fitting well, stick it back on the kiddo and use a marker to draw some lines on the cap. 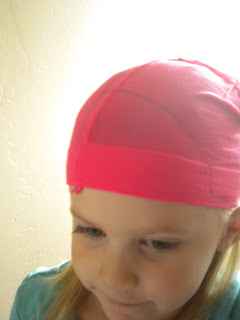 cut the yarn in lengths that are twice as long as you want them to be.  for lala pigtails, i would cut the yarn in pieces that are 3-4 feet long.  then just start sewing them on the skull cap.  use a large zigzag stitch so that it will still stretch once you have it on the kiddo's head.  start with the part line, and sewing the middle of the yarn onto the line, begin stuffing yarn under your presser foot.  it will take more than you think-- just keep stuffing them under there! 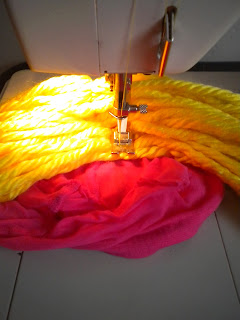 ****  while sewing, be careful that you are not sewing any additional layers on the skullcap except the line you are working on.  trust me on this, you don't want to have to unpick anything on nylons or you will end up with some pretty big holes.  it certainly takes a little bit of work to make sure everything is where it is supposed to be, but stick to it. ****

for the part line, you will want to do a second layer as well.  then do the same thing as close to the edge as possible around the entire cap, except where the bangs are going to be.  cut more yarn as needed.

once you have all your yarn attached, put it on the kiddo and style and cut like you would real hair.  part it down the middle, pull it into ponytails (being sure to leave out the bangs, but include all the rest of the yarn from each side).  i used regular rubber bands for the ponytails.  then i trimmed everything up.  make sure the bangs are cut nice and straight (all three layers), and trim up the ponytails. 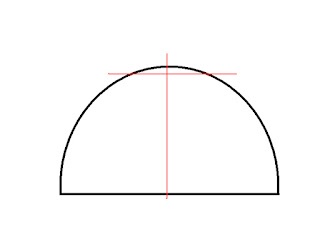 the part line will probably need a second layer.

for rapunzel, i cut lengths of yarn that were twice as long as my kid was tall.  the braid will take up some of the length, so make sure they are super long. 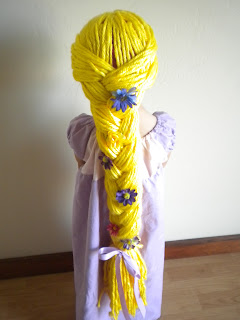 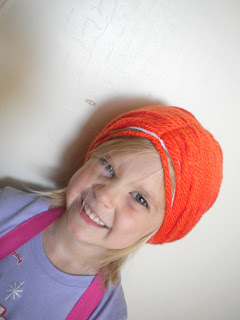 this one could have used a second layer on the top, but since a hat is going over the top, the most important part is just the very front and the back braid.

but the good thing about this process is that you can always add more yarn where ever you need it. 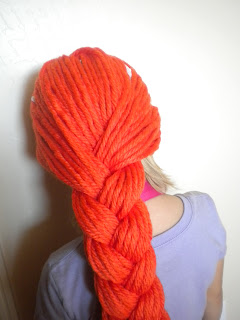 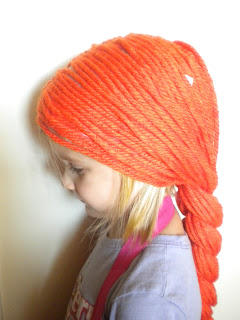 ﻿okey-dokey.  that is about it.

it sounds much more complicated than it really is.  just do it!

have fun and i would love to see pics if you make one.
written by Leisel at 9:01 AM

Email ThisBlogThis!Share to TwitterShare to FacebookShare to Pinterest
Labels: Tutorial

Awesomeness!! You are so talented. Thanks for the great tute!

This is so cool. Thank you for sharing! I would never think to make my own wig. That's the one thing I would always buy.

Thanks sooo much for the wig tutorial! Hopefully mine will turn out as cute as yours!

Thank you so much for this tutorial! The wigs came out so cute and everyone loved our costumes! http://northernearthgrl.blogspot.com/

It's a pity you don't have a donate button! I'd most certainly donate to this excellent blog! I suppose for now i'll settle for book-marking and adding your RSS feed to my Google account.

I look forward to fresh updates and will share this site
with my Facebook group. Talk soon!

Everything is very open with a really clear explanation of the challenges.
It was definitely informative. Your site is useful. Thank you for
sharing!

Hi there, every time i used to check blog posts here in
the early hours in the daylight, for the reason that i enjoy to find out more and more.


Stop by my web-site; low carb toast
my web site - no carbs diet

Pretty great post. I simply stumbled upon your blog and wanted to say
that I have truly enjoyed browsing your weblog posts.
After all I'll be subscribing for your rss feed and I am hoping you write once more soon!

my web-site :: psd to wordpress

I seriously love your blog.. Pleasant colors & theme. Did you build
this web site yourself? Please reply back as I'm looking to create my very own website and want to know where you got this from or what the theme is named. Many thanks!

Excellent article on wigs .. I'll absolutely try my hands on those.

Looking for more updates from you..
Thanks

Wow!! thank a lot for sharing this post!! i guess this is the easiest way to make these attractive wigs! Full Lace Wigs

Amazing post! I think you are so intelligent its a great idea to make a wig. I will surely try it for my little girl she will really like it. Thanks for the wonderful post.
Human hair extensions

So cute post on kids hair wigs. I expect a great post on lace frontal wigs with closure from your blog :)

I really appreciate the information that you have shared on your Blog. Thanks for shearing this blog.

As much as there are discouragements, it is true that mathematics is hard. Like in my case, I was never discouraged by anyone about math but I still find it very hard and that is why I am requesting your Math assignment help. I am tired of struggling with mathematics and spending sleepless nights trying to solve sums that I still don’t get right. Having gone through your Math homework help, I am sure that I will get the right help through you. Please tell me what I need to be able to hire you.

How much do you charge for a Statistics Assignment Help task? Take, for my case, where I need you to provide me with the Statistics Homework Help on plotting a scatter plot with a regression line? How much should that cost? Do you charge on the basis of the workload or have a constant payment?